Why multiple pathways? Because not everyone needs college-level algebra designed for science and math students. Many four-year institutions are accepting college-level liberal arts math, statistics, and algebra (without the STEM focus). Thus, leading us to NVC’s Project Math Paths (PMP).

Many students come to NVC ill-prepared for the challenges they will face in math. Not only is this scary for those students, but it can also mean the difference between a student graduating or not. Students, faculty, and advisors are learning about the different math options and how to place students in the right math class, for their career of choice, and at their appropriate ability level.

[image 3]To help students get on the right math path and keep them on the right track (low-risk, shorter path), students are ‘SMATed,’ or advised, in every developmental math class, as well as at the beginning of MATH 1414 (college-level math for STEM students, considered to be the hardest freshman-level math class). Students receive one-on-one advising within the first week of class (MATH 320 and MATH 1414) so that if a student is on the wrong path, or placed at a less-appropriate ability level, he/she can be immediately transferred into a more appropriate math class.

In order to make this change happen, Mini Vista Central was born, in Juniper Hall, room 329. During the first week of class, NVC math faculty, in partnership with the NVC departments: Financial Aid, Veteran’s Affairs, Student Success, and others, welcome, advise, place, and accelerate students through the math core.

Project Math Paths has been on a pilot mode since spring 2015. The pilot recently received huge support, thanks to a recent five-year, $2.3 million Title V grant from the U.S. Department of Education. NVC faculty Anna Harwin, Mary Zocchi, PhD, and Thomas Pressly, PhD, had the vision for this project and prepared the grant proposal.

A group of students recently had the opportunity to experience Project Math Paths in action. NVC math faculty members, Mary Zocchi, and Mat Roy, served as advisors in the “SMATing” process, in which math students briefly took time out of their Math 1414 class (college algebra for STEM students) to have a chat with Mary and Mat, to determine if they were in the appropriate course and on the right math path.

As an example, first-year NVC student, Matt Gearhard, plans to transfer to a four-year university to study advertising. Mat Roy advised him of his option to take a less-intense math course than the one he was currently in since he’s on the liberal arts path.
Matt Gearhard then visited “Mini Vista Central” and talked with NVC engineering faculty, Thomas Pressly, PhD, to be advised further, before swapping courses. One of the benefits of “Mini Vista Central,” is that representatives from Admissions and Financial Aid on-hand, to help students get into their math sections easily.

Matt Gearhard said that while he didn’t end up changing math courses, due to financial aid issues, going through the “SMATing” and “Mini Vista Central” process opened his eyes to what math courses he actually needs to take, to eventually transfer to a four-year institution, as an advertising major.

“[Going through this process has made me more] cautious of what I’m signing up for. I wish I would have known about this sooner,” said Matt Gearhard, who admitted to registering too late in the beginning of the semester, to have more math class options.

Interim NVC Vice President, Amy Whitworth, PhD, said that even though Project Math Paths is still new, it has huge potential for reducing the failure rates in math.

“Like the saying goes, ‘it takes a village to raise a child,’ it’s going to take the whole college to help students succeed,” Amy added. 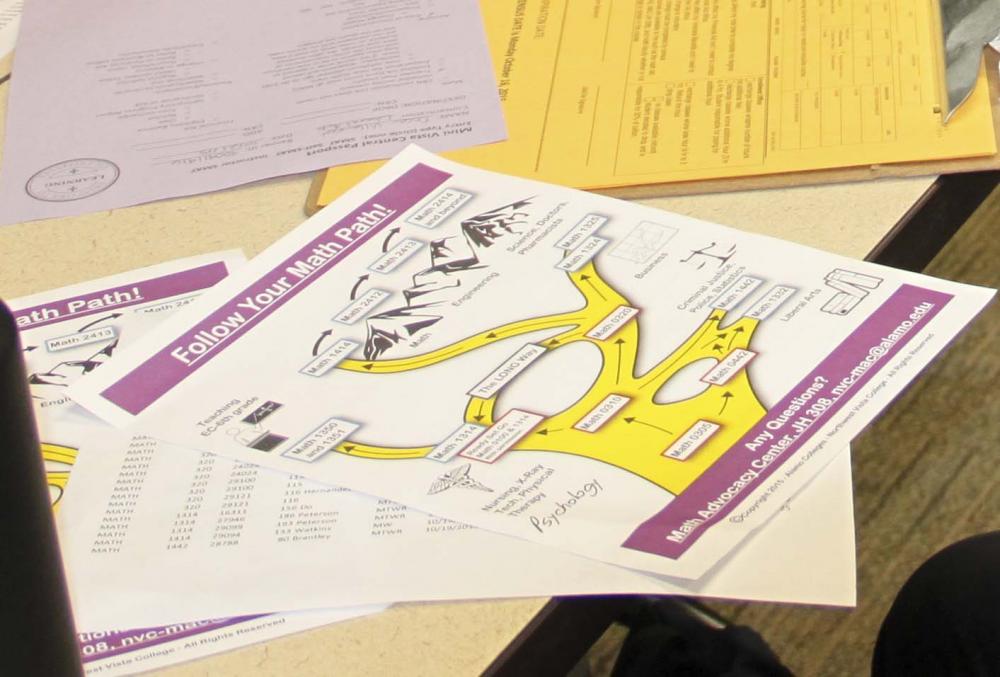